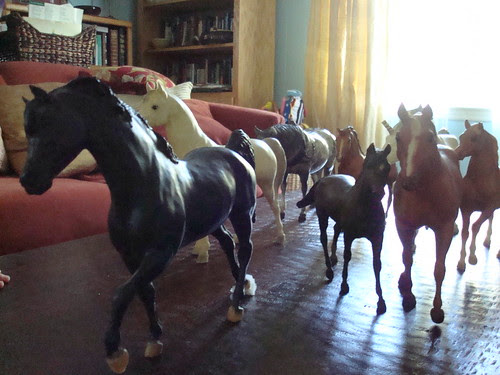 Dig our new plastic horse herd! Bean and I picked them up this morning after posting our desire for plastic horses on Freecycle. I was expecting a bunch of crappy My Little Ponies, but these were clearly someone's prize collection once upon a time. I would have totally loved these when I was a little girl. Who am I kidding? I totally love these NOW! A complete stranger has made horse-loving Bean's week, bless her. 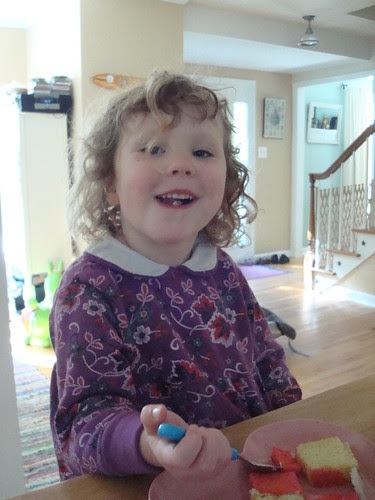 Sometimes I thoroughly enjoy my job. "Staying home to bake for appreciative children" is definitely one of my favorite job description line items of this stay-at-home mama gig. Here is Bean, chowing down with gusto on a post-nap slice of Battenberg cake. Before this, I could literally never get Bean to smile for a photo unless I asked her to think of her Papa and how much she loves him. Apparently, marzipan-wrapped cake loaves will also work!

My friend, Kat, showed me her copy of The Gentle Art of Domesticity, and I knew right away that I needed my own copy. The recipe came from this wonderful book, as have many other inspiring (and beautifully photographed) ideas for creative home life.

I wonder if "Queen of Hearts Jam Tarts" will result in an equally smiley photograph?

In which once again I am stupid with the hair color 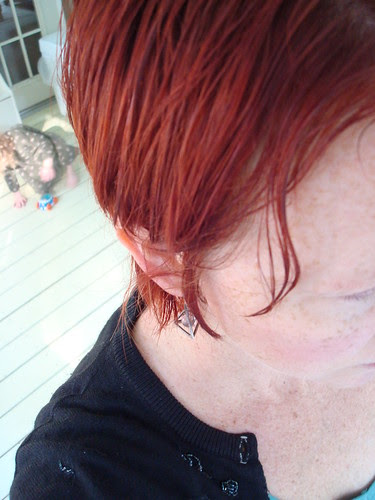 So I dyed my hair the cheap way again, and once again it came out way brighter than I'd intended. I didn't think it was that bad, though, 'til yesterday. I was out gardening in the sun when I heard the door across the street slam. Then the excited voice of our 12-year old, home-schooled neighbor yelling, "Whoa! Mom! You've gotta come see this! Look at her hair!"

Entertaining children was not quite the effect I was going for. Bean asked me the day after the dyeing, "Mom, what happened to your hair? Your normal hair?" So perhaps I should've realized it was worse than I thought.

Oh well! I'm still too cheap to pay someone to fix it and too busy to spend that much time obsessing over it anyway. It'll fade sooner or later.
Posted by Sugarmama at 1:47 PM 7 comments: 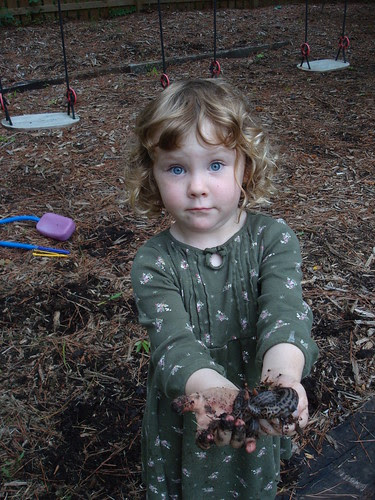 I've got to post this because the photo--and the event itself!--were too hilarious not to put out there. I was trying to keep loud little Bean out of the house over the weekend while her early-rising Papa caught a quick nap. We went out into the backyard to do a little weeding together, which she enjoys because it invariably means we find some form of interesting life. In the case of the barberry shrubs near the swings, pulling up handfuls of overgrown crabgrass yielded handfuls of overgrown slugs. Yuck!

I'm never bothered by this sort of thing, but even I was grossed out when I saw the slugs wrapping themselves between her fingers, webs of slime draped behind them. After Bean stashed the slugs in a new bowl habitat and came inside, it took me ten minutes and a new green scrubbie to get rid of the horrible goo--and then I had to throw the scrubbie away because it was so filled with nastiness.

Such is life with Bean!

I suspect that some years down the road, when I look back on this era in my life, I will think of it as a time when I didn't do anything particularly well. I'm pretty smart and accustomed to feeling more or less successful in whatever way I choose to spend my time. Not in a brilliant, genius kind of way. Just, you know, pretty good.

Now, I don't whether it's because a third kid has thrown me or if the new business is taking its toll, but I just feel like I suck at stuff. I can't keep up with this blog or others' blogs or even the business blog. I can't manage not to yell at the kids at least once during the course of my day (and let's face it, it's usually more than once). I can't figure out how to improve my deteriorating relationship with Sister which seems to be made worse with every day of math homework. I can't get anything done. The house is filthy. Every available horizontal space is taken up with boxes of crap. You know? It's just overwhelming if I stop to think about it. And I've never been very good at ignoring things that bother me.

Intellectually I know that this is probably par for the course with young children around, but I just don't know how to turn off my inner control freak.
Posted by Sugarmama at 5:48 AM 2 comments:

Things not to say to Husband

What I would put right now as my Facebook status update if my husband didn't have me as one of his friends: "Sugarmama is real damn sick of her husband running half an hour late for dinner lately. Especially on nights when she got no fucking sleep because the baby kept her up."

There. I said it.

And now for a pre-late-dinner cocktail.
Posted by Sugarmama at 3:21 PM 3 comments:

My first two girls seemed to get all the oral fix they needed through nursing. Neither Sister nor Bean ever cared for a pacifier. (I did offer one sometimes if all else failed to soothe their screams, but it was always rejected with outrage.) Sweet P is very different. She nurses plenty, but when she doesn't have a booby in her mouth, she also likes her little rubber plug. She's even discovered that I often keep one in her car seat in the dining room so as to never be without one in the car. She'll sometimes get this look in her eyes in the middle of whatever she's doing--today it was me playing "Itsy Bitsy Spider" with her--and she'll crawl off to find that spare. She pops it into her mouth and looks so pleased with being able to help herself that I don't have the heart to take it away.

But I think she might be developing a little oral dependency now. For the last week she's been waking up 5 or 6 times a night as if she were a newborn. She doesn't appear to be teething anymore--that was three weeks ago and teeth numbers 5 and 6 finally came in on her upper gums with no more inflammation anywhere in her mouth. I think it's just that in her dimly night-lit room, she can't find her freakin' pacifier. I nurse her to sleep and generally put her down without incident. But when she wakes up a couple of hours later, I give her the bink and it puts her right back to sleep--'til it falls out. Again and again.

At 4:00 this morning, after waking up to retrieve it for her several times, it finally dawned on me that I was being used. Finally, I know, but I was tired as hell, okay? I told Husband--who at last registered that perhaps he should take a turn getting up--to just look in on her but not give her the damn plug anymore. He did just that, but when he left the room Sweet P screamed for quite some time afterwards. I'm not even sure if it was constant or if she dozed off. I was such a zombie at that point that I slept (fitfully) through whatever fuss she might have been making before getting up to nurse her at 4:45 when I heard her yet again.

Do you ever get the feeling that a good night's sleep is the modern holy grail? I'm going to stop giving her the pacifier at night, I think, in the hopes that a cold turkey approach will end this awful new nighttime routine of hers within a few days. I'm so tired of being so tired!
Posted by Sugarmama at 12:18 PM 5 comments:

This is a Flickr badge showing public photos from Secretsugar. Make your own badge here.